"It is not entirely out of line to call PAST PERFECT—filmmaker Cynthia Madansky's meditation on Jewish history, notably the Shoah—spirited and darkly amusing. After all, Madansky's experimental excursion through an emotional and physical landscape predicated on obliteration, omission and, more than half a century after the fact, a pernicious, creeping "Holocaust fatigue," embodies the same blend of resignation and outrage that defines the very best Yiddish jokes (one of which inexplicably came to mind repeatedly during the watching of this film: An old woman is called out of her home by a gleeful neighbor, "Come see the idiot in the square!" She goes to the center of the shtetl and there, amid a crowd of laughing villagers, stands the fool, spittle flying from his mouth, nonsense on his tongue. It is her own grown son. "I'd laugh, too." she sighs, "if he weren't my idiot." Like many good Yiddish jokes, it's not actually funny so much as, well, depressing in a funny way). In PAST PERFECT Madansky manages—frequently, brilliantly—to evoke a similar pang as greets the historian, documentarian, genealogist, or traveler when confronting the catastrophic absence that is the Holocaust. When all is effaced, the only logical response is speculation.

"Which is what Madansky does in the film's three simultaneous components. A tour of Jewish sightseeing attractions in Poland is, again, almost a conceptual joke. The filmmaker's camera stands, an impassive viewer, taking in a contemporary Warsaw eerily devoid of history. The voice-over language of the guidebook details the most convenient bus routes to places of note where, once one gets there, one has to pin history to an expanse of sky, a stretch of streetcar tracks, or the side of a 1970's apartment block. On the former site of the infamous ghetto, now an anonymous residential area, we are told, "The memorials are prominent partly because they rise up out of a monotonous, post-War landscape." Rise up is pushing it, to say the least; the low square stones seem no less monotonous than their surroundings.One can hear many things in the voice of Anna Madansky, the filmmaker's 91-year-old grandmother: the impotence of a woman who witnessed the Holocaust at a not-so comfortable remove in Chicago; the resignation to such powerlessness sixty years after the fact, to say nothing of the rueful vanquishments of advanced age ("If I get up in the morning, it's good."); and the vague comic exasperation of a woman who can only partially understand her own granddaughter's obsession with the Holocaust. We watch Anna go through the quotidian tasks of her day, and throughout, we hear Anna asking the filmmaker why she always asks these same questions, and then wondering aloud why the filmmaker is crying, once again.

"The imagined lives of Bella Chaya, the filmmaker's great-aunt who perished in Treblinka, make up the third strand of PAST PERFECT. Not the life, precisely, but the last day of same. Madansky constructs numerous possibilities for who she might have been: Bella Chaya the mathematician, for example. ("She had an ease with numbers, a facility that needed encouragement, an abstract ability to comprehend logarithms and geometry...Her gift transformed into her worst enemy. She began calculating the probability of life and death and knew it was all coming to an end. She wrote: 'What is noteworthy is how one is equipped for one's own extinction.'")

"PAST PERFECT is a plaiting of invisibilities, an attempt to weave whole cloth from threads that have been entirely disappeared (human evil requires the use of the transitive form here). In writing about the film, Madansky has quoted The Dybbuk, S. Ansky's mystical 19th century play about the transmigration of spirits: "When someone's life is taken before their time their soul appears in someone else's body." Certainly the lives of the long-dead Bella Chaya attest to this. The imperviousness of history to human longing, the insurmountability of PAST PERFECT's mission to map an irretrievable landscape, also brings to mind a quatrain by W. H. Auden: "Earth's mishaps are not fatal / Fire is not quenched by the dark / No one can bottle a Breeze / No friction wear out Water." It seems we are condemned to repeat history whether we remember it or, as in Madansky's case, we are unable to forget, even if such physical relics of memory are denied us. As the tour guide states with a strange, counterintuitive breeziness, "Keep track of the time, or you might find yourself forced to stay in Auschwitz overnight." 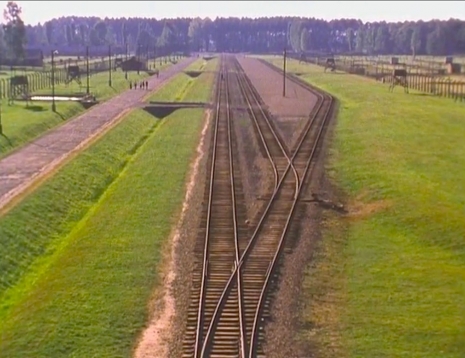 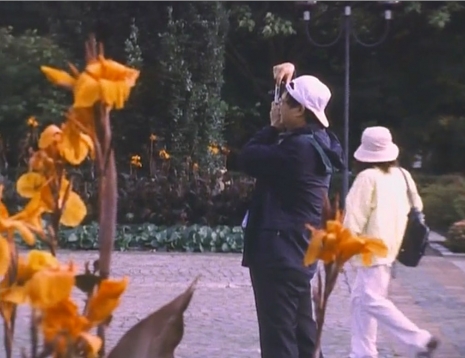 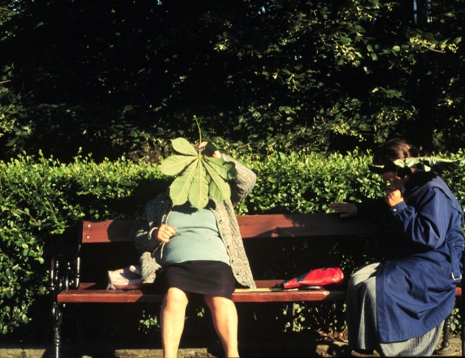