1+8 is a dynamic eight-screen video installation about Turkey and her eight neighbors based on the feature film of the same name directed by Cynthia Madansky and Angelika Brudniak. Each screen features life on both sides of the border, from Armenia, Bulgaria, Georgia, Greece, Iran, Iraq, Nakchivan [Autonomous Republic of Azerbaijan] to Syria.

The protagonists of the installation are the borderlanders. They are introduced in a choreographed sequence of personal encounters, revealing what connects and separates people who live at the edge of their country, bringing up questions of identity, identification and the nation as imagined community. The visuals for the installation are comprised of direct address interviews and performances (including dance, music, rituals) as well as quiet images contemplating landscape, architecture and daily life at the borders. The result is an assemblage of intimate portraits abundant with experiential and lyrical moments contemplating social reality ideological fissures and poetic energies present at junctures where identities, landscapes and communities converge and/or differences are asserted.

The viewer experience is achieved with the help of a custom made algorithmic computer program that creates a dynamic projection drawing edited sequences from an extensive database of videos filmed at the eight borders of Turkey and sorted in conceptual categories. The result is a unique viewer experience, as the choreography of videos on the eight screens is created dynamically and thus will never appear the same way twice.

The simultaneous presence of all eight borders/projections highlights the complexity of Turkey's geopolitical gestalt and draws the viewers' attention to the wide range of relevant issues concomitant at the country's contour. 1+8 engages in urgent and striking contemporary discussions on issues such as nationalism, geography, raising questions about identity, identification and the nation as an imagined community. The film conveys the diverse ways borderlanders mediate with the "other" (neighbor) around narratives of gender, identity, difference, inclusion and exclusion. Through an assemblage of encounters and experiential moments, 1+8 portrays the human tensions, the ideological fissures and poetic energies present at the junctures where identities, landscapes and communities converge. The borderlanders give a first hand intimate account of border culture, rituals of transaction and mediation reflecting on issues of inclusion, exclusion, national and transnational connectivity and interdependence, conveying whether they experience the border as a bridge or a barrier. The contemplation of all eight neighboring countries reveals the complexity and importance of Turkey's geo-political position between West and East, Europe and Asia, the European Union and the Middle East.

The 8 projections are positioned in reference to the actual geography of Turkey — the walls of the exhibition space representing the country's borders. Two projections on the north western wall represent the borders of Greece and Bulgaria, six projections on the southern and eastern walls represent the borders with Syria, Iraq, Iran, Nakhchivan, Armenia and Georgia. The choreography of the installation is designed to draw and shift the viewers' attention. The focus of attention is one voice at a time, while one protagonist is speaking/performing the other screens show quiet or still videos of the borderlands and/or silent portraits of the borderlanders. 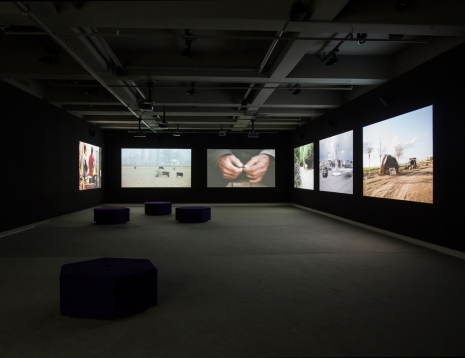 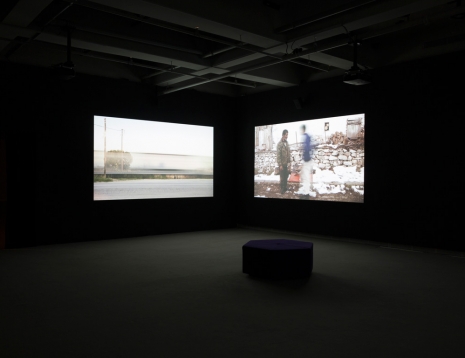